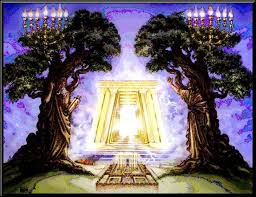 The Mighty Angel with the Little Book

8 Then the voice which I heard from heaven spoke to me again and said, “Go, take the little book which is open in the hand of the angel who stands on the sea and on the earth.”

9 So I went to the angel and said to him, “Give me the little book.”

And he said to me, “Take and eat it; and it will make your stomach bitter, but it will be as sweet as honey in your mouth.”

10 Then I took the little book out of the angel’s hand and ate it, and it was as sweet as honey in my mouth. But when I had eaten it, my stomach became bitter. 11 And he[d] said to me, “You must prophesy again about many peoples, nations, tongues, and kings.”